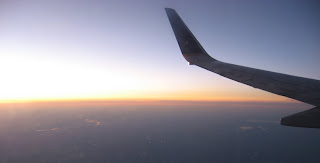 You wouldn't think taking a short hop out to Vegas would be too tiring...but strangely it is. I was dragging ass a bit when we got here on Saturday afternoon (musta been the 3:30am alarm to catch a 6am flight). But my whole outlook changed when we got close to Red Rocks for the first on Sunday. When you're down in Vegas you can see mountains off on the distant horizon, but they are pretty much silhouettes most of the day. When you're driving up 215 and you're getting close to the mountains, they still appear as mostly dusty gray peaks, and something about the geography still hides the view of Red Rocks, but as soon as you turn right onto Charleston Blvd...bam! The Canyon is sprawled out panoramic-style in your windshield, and the bright colors create an amazing contrast to the gray landscapes nearby. I pretty much wet myself. There is a lot of damn rock here.

The weather on Sunday was pretty great--warm with a pretty strong wind at times. We climbed in the Calico Hills at an area called the Panty Wall, which had a really great collection of bolted moderates. A perfect way to get introduced to the canyon. There were quite a few people there from all over--Germany, British Columbia, California. I love world-class climbing areas for the opportunity to meet people from all over. I took a lot of pictures of these folks because it seemed every time I turned around, there was another great photo op. There was just so much color and space and geometry, especially after being so used to trying to shoot in the close quarters of the East coast woods.


Our second day in the park, Monday, wasn't nearly as fun. The weather was cold and windy as hell, so we ended up hiking around all afternoon. There was even snow on the ground in some shady parts of the canyon. We left Asheville for this? We spent the day getting wind chapped and reconnoitering for later in the week. That night we also went to the Vegas strip with Melissa's cousin and her husband...both were very cool people. Melissa and I didn't gamble at all when we were there, which seems to upset a lot of people who I tell this fact to. I was happy just to wander around a take pictures. And for anyone wondering, no...we didn't get married, either.


The weather was looking crappy for the next couple of days so we decided to make the drive over to Flagstaff, AZ, about 4 hours away. We spent 2 days there, and the whole town was covered in tons of snow--which figures since the town's elevation is about 7000 feet. There were 15 foot piles plowed into the corner of some parking lots...needless to say, no climbing got done, but we had a god time checking out the city. I did try to go scope out one bouldering area that's only 5 minutes from town--Buffalo Park. While Melissa wisely stayed in the car I hiked a few hundred yards across a barren white landscape only to fall into a chest-deep hole covered by snow between 2 boulders. Luckily, I only tweaked my knee a bit, but it was enough to send me back to the car.

We also did a side trip down to Sedona one evening for dinner and were blown away by the drive and the whole area. Tons of sandstone formations and towers everywhere. We got some crappy pictures b/c it was getting late, but this is a place definitely worth visiting again someday, especially since it was snow-free in February and we heard lots of good things about a local bouldering spot called the Anvil boulders. So on Thursday morning, it was back to Vegas... (Part II to come soon) 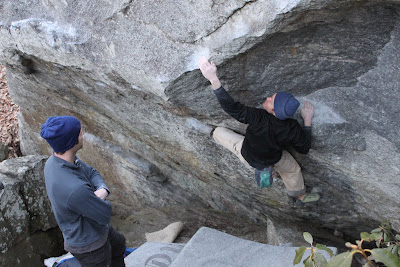 I went out to Rumbling Bald this past Sunday, and though there was a lot of snow on the ground, the rock was dry and crisp. I spent the first half of the day going easy, wary of overdoing it. But then I got caught up in trying to 2 problems on the Cereal boulder with a fun crew of guys listening to techno music. Ah, the sweet motivation of house / trance / jungle beats. I was actually able to send a sweet V6/V7 called 'Sunrise' on the boulder. I guess the yoga and working out are paying off. Or the techno....

I shot some pictures that day, but this video of Zach climbing Sunrise is the coolest stuff I captured. He totally floats most of the climb and makes it look easy...until the top.

Zach on Sunrise (V7) from Frixtion on Vimeo.

While it's been looking very up in the air whether Melissa and I were going to be able to take our planned Vegas trip next week, the trip is finally coming together. We're flying out on Saturday and will be there all of next week. And depending on conditions, we might make the 5-hour drive to Flagstaff, too! I've only been to Vegas once--and it was weird (live lions and gambling, oh my!)--but I'm psyched to be going back for climbing this time. Red Rocks looks amazingly good. Now we just gotta teach Melissa to rappel so we can hit up some classic multi-pitch (or try to find some walk-offs).

I'll try to post pictures from the road if I can! And thanks in advance to Howie F. and Chris D. for the guidebook loans.
0 COMMENTS :: Add a Comment Posted by Matt P. 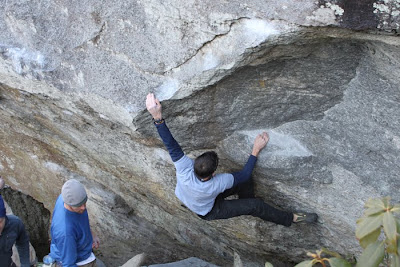 As you can see when you opened this blog, I'm in the process of making some updates / changes to the site. For awhile now, I've been wanting to go with a cleaner look that appeared more like a website, since there were some additional features I wanted to add. By using the links at the top of the page, you can go to the Current Conditions page, which I posted about last week. This is a user-generated forum for sharing beta about the rock conditions. I think I have figured out the issue with why the page was getting spammed. So it should be working fine now. Note to all of you who might have plugged the email address for page the into your phone--the address has changed! Again, I had to do this because of the spammers. Dirty, dirty internet...but check out the page for details on the email change.

Also new is the Climbing Area page. I started a google map of some of the best and well known areas in WNC. I'll be adding some basic beta and images for each of the areas as I have time. Anyone can update the map, so feel free to jump in and share anything on there. It's just another resource for people to check out and use as they see fit. All of the pages--the blog, the Climbing Conditions page, and the map-- are in kind of a Beta stage for now as I tinker around with the new look and feel.

Please let me know what you think! It's still got some rough edges to work out (sadly, you can't build a shadow site in blogger while your working out the kinks), but I'm happy to hear any feedback.
1 COMMENTS :: Add a Comment Posted by Matt P.

Well, if you love big rocks, it buys a hell of a lot. If you've ever bouldered at Rumbling Bald even once, chances are pretty much guaranteed that you climbed on one of the boulders in the recent CCC land purchase. Take a look at the map below to see how much area this purchase covers. And now those boulders are protected from development and accessible to climbers forever...to me, that's pretty much priceless. And in reality, you couldn't buy a house in Asheville with 3 walls for that money, even in a recession. So the guys at the CCC got a lot of land and a lot boulders for a great price. 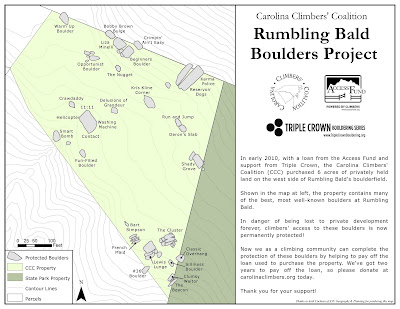 Still, the loan does have to get paid off! If you value the Bald and can make a donation towards this great cause--awesome. (You can do that here.) If you can't work that angle, perhaps you can ante up some good schwag for a raffle instead. There will be a few of them happening to support the cause at local climbing gyms (to be announced). Maybe the company you work for makes something cool and can spare a few? I'm trying to wrangle up some copies of the Adventure Photography book I just edited to give away. Get creative! Like Brad Caldwell in SC, who is selling topos to a local bouldering area to raise funds. Every bit helps! So if it's been awhile since you had a lemonade stand, break out that Country Time and the big pitcher and set up in the parking lot at a local bouldering spot. Contact Zachary Lesch-Huie at the CCC with any ideas for ways to help.

I just realized that I started this blog just a little over a year ago. Thanks to everyone who keeps checking in--I just looked at the data for the site and it had over 2,000 visits last year. That's not huge by any website standard, but it's cool to know that the stuff posted here isn't just going into the ether. Regardless, 2,000 visits seems like a big number to me. When I first started the blog last year I had a small injury in my right shoulder that got better quickly; I was bouldering V8 again by March of 09 and working on sending my first 5.13 (which i never did cuz I broke a key hold on the route, Purgatory, at Ghost Town, which is now closed sadly). Then I got injured in June in my left shoulder and neck and it's been pretty rocky (pardon the pun) since then. I haven't been as involved in climbing, and hence this blog, as much as I would have liked in the last 7 months. But I keep working out and doing PT, and I like to think I'll be up and climbing stronger again soon. But I had a very cliche realization while I was climbing in the gym this Sunday (to wet out for the Bald). I was stuck climbing problems that wouldn't have been a challenge a year ago, but I wasn't too bummed. In fact, I was still having a great time and I wanted to slap myself for thinking that the best climber is the one having the most fun. But I guess it's true in a lot of ways, cliche as it sounds. So whether I'm climbing V2 or V8 in the next year, I just hope to keep climbing and seeing you all out there (and here).
0 COMMENTS :: Add a Comment Posted by Matt P.

Frixtion is about Western NC climbing, Southeastern climbing, my thoughts on the sport at large, and weird & cool climbing stuff found on the web, with occasional posts by guests.